If you've been reading all along, you'll know that I've promised more on the taxi drivers and more on Pachacutec. There is a connection, I promise, ok, maybe not so much Pachacutec, but Pachamama. Read on...

To preface this post, let's say that neither of us is a particularly religious being. I have done a bit of world religion studies just for personal interest. Jon, however, has a completely irrational secular love of Jesus. (Which I think really scares people who have never met him before, and he's wearing a shirt that says "Jesus Loves Me". Either that, or they think they share his (non-existent) beliefs and it is all good.) We both enjoy visiting churches and sites of worship, so it all works out well when we're traveling.

You may know that a huge majority of Peruvians are Catholics. Roman Catholicism is the official state religion, and obviously plays a major role in Peruvian life. As we were driving, several of our taxi drivers made the sign of the cross over themselves, and just kept on driving. (Pedal to the metal! Please save me Jesus?) Also, there were religious icons hanging on wind shields and rear view mirrors of every vehicle we were in.
Every town or city we visited, no matter how big or small, had a main square with a large cathedral. Several places we visited were celebrating festivals of Saints or Holy Days. No one we asked could explain what the exact occasion was, just that a festival was taking place. In Cusco there was a band marching the streets that grew in size each time we crossed paths--eventually, they were marching with a procession of costumed dancers. In Aguas Calientes, the music from a parade about town was non-stop until almost 5am. All of these festivals create a huge sense of community.

However saturated the country may be in organized religion, it is also holding on to Incan customs and traditions. There are native cultures - like the ones on the Uros Islands or Andes highlands, who still believe in ancient practices. For example, on Taquile, the custom is that a young couple lives together for 5 years before getting married. They live in the man's parents house, and having babies during this time is perfectly fine. You could see how the church would have issue with that. Maybe?
So, one belief system mixes with another and the people seem to be alright with it. You can see this in the cathedrals themselves. First, some of the stones used in the Cusco Cathedral were looted from Sacsayhuaman, and there is Incan iconography on the church exterior. There is also a beautiful cedar choir area that has some intricate carvings that represent Pachamama hidden in with the carvings of the saints and popes. Vladimir, our tour guide for Lake Titicaca, explained that many people meld Christianity with Pachamamist practices.

Peruvian painter, Marcos Zapata, has also put his own spin on The Last Supper. His version shows Jesus and the disciples dining on cuy and drinking chicha. This painting is in the Cusco Cathedral, but photos were not permitted. If you were lucky, you may have received a copy in post card form!
And just so Pachacutec doesn't feel left out, there were monuments of him in more than one city we visited. Here's the dorky photos. 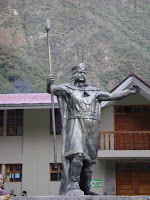 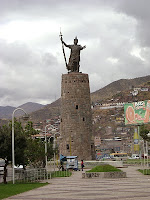